Warning- Massive spoilers! To properly cover this movie, I need to discuss the plot in its entirety.

Found footage movies provide a unique perspective to the movie-goer. When done properly, found footage connects the watcher to the characters in a very intimate style. When not done properly, the technique can be very jarring, causing the plot to get lost among the shaky camera. Afflicted combines found footage and the vampire world, something I had not seen before. The movie shines at times and staggers occasionally, making Afflicted a tough film to assign a score.

The film can be properly spliced into three acts: pre-vampire, transformation, and post-Clif.

We begin with the setup to Afflicted. Two lifelong friends, Clif and Derek, are taking a trip around the world, something that Derek has done before. After landing a boring IT job, he decides to travel again. Derek suffers from a serious brain condition that could cause him to die at any time, motivating him to travel before losing the chance. Clif provides the camera smarts to the twosome, showing off his cool techniques and being a great friend to Derek. After the two have a going away party, they set off, starting their trip in Spain. I found the “pre-vampire” part of this movie to be the strongest; establishing the style and the development of the two leads felt incredibly authentic. I almost forgot that Afflicted would be turning into a very dark and gory movie for a while. The two meet up with some friends and go to a bar, to which Derek finds a lady and returns to a room. Deciding to break into the room, the friends find Derek knocked out and with an odd bite mark on his shoulder. He thinks nothing of it, and the two continue their journey forward.

Derek’s transformation into a vampire occurs rapidly. The two visit a restaurant, and Derek cannot hold his food down. He begins developing unusual abilities, including running at high speeds, punching through rock, scaling buildings, and jumping great distances. The “transformation” portion of the movie felt the most out-of-place and weakest of the three sections, simply because of Clif’s lack of surprise at everything. Clif reacts similarly to an NBA star hitting a bunch of three-pointers in a row. If I watched my best friend develop these abilities, I would have taken the first flight back home to get him to a hospital; I would be in sheer terror. Clif’s lack of shock to the whole situation felt really bizarre and out of place. Near the conclusion of the transformation act, Clif finds Derek entirely transformed and turns on his friend, killing him and drinking his blood for survival. While the “transformation” portion of the film was the weakest, I genuinely did not see this coming and provided a great shock moment to Afflicted.

The final third of the movie turns into a Jason Bourne movie, with Derek on the run from Interpol and taking shelter in an underground bunker in Paris. His goal is to find Audrey, the girl who initially turned him into a vampire. He eventually finds her, and the two engage in a Matrix-style battle, both unable to eliminate the other. She explains that he will never die and turning Derek into a vampire as a reward due to his brain condition. The “post-Clif” portion of the film delivered many thrills and presented Derek as someone who continues to fight humanity, not wanting to hurt others but needing to out of necessity. While I did enjoy the rapid injection of pace to the final part of Afflicted, the lack of Clif hurts the established dynamics from the first two halves; Derek Lee did very well carrying the movie on his shoulders during the final 45.

Afflicted is a very violent movie. I was not prepared for the sheer amount of blood, guts, and downright brutal ways people died in this film. I did not notice any CGI being used; if they did, it was done incredibly well. Afflicted’s settings also gave a lovely backdrop to the transformation of Derek. The viewer is taken through awe-inspiring views of foreign countries and also very menacing areas. If you enjoy gore, Afflicted will scratch that itch.

Afflicted would not have made such an impact without the two leads, Derek Lee and Clif Prowse, through all the outside influences. Both did an absolutely wonderful job directing and starring in this film, leading to a wildly authentic experience. The other actors did just enough to keep the film moving along without taking too much away from the main cast.

Afflicted created a unique spin on a well-worn vampire trope. I found the acting and the special effects incredible, with the occasional drop in quality from the story taking a little bit away overall—a worthwhile watch to anyone who enjoys found footage movies or vampire flicks.

Found footage and vampires? Afflicted attempts to merge the two together into a thrilling experience. Did they succeed? Find out below! 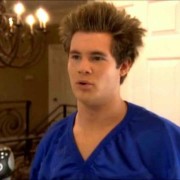